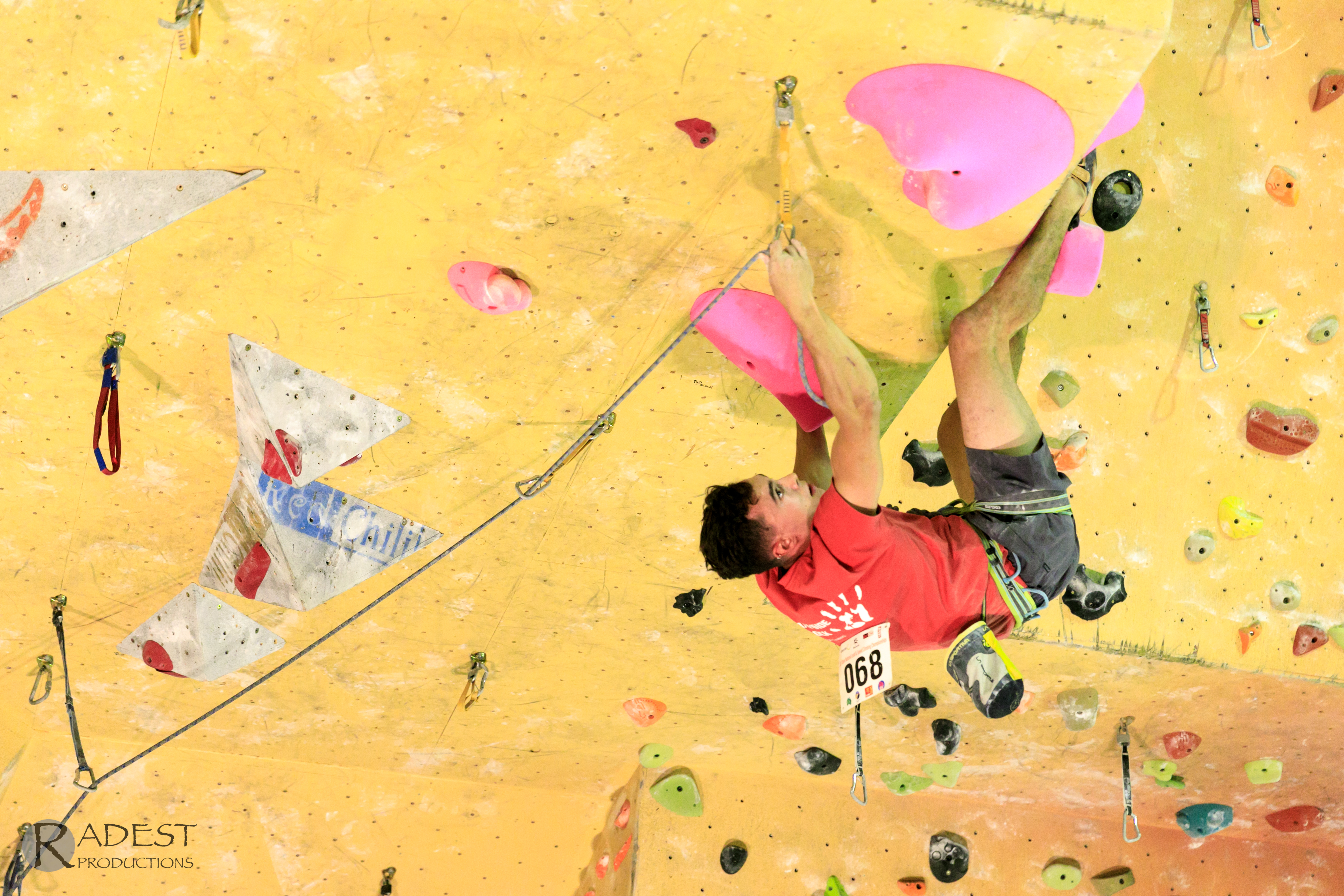 Sydney Indoor Villawood was the venue for this year’s national titles, where the best climbers in the country would battle it out in both Speed and Lead… The two days of competition saw some great personal achievements and also some new players rising to the top.

Here is Campbell Harrison’s take on the event, after he walked away with a dominating win and became the national champion.

I went into this year’s Lead Nationals with a range of mixed feelings and emotions. I’d been training really, really hard for this goal since only a short time after coming home from the World Youth Championships in Guangzhou, so I knew I’d put myself in good shape for the event, and a season on the IFSC World Cup circuit had definitely matured me as a person and as a climber. Conversely, however, I was putting a great deal of pressure on myself that I hadn’t quite dealt with. I felt that, being Australia’s primary male international lead competitor in 2016, that I needed to win, almost to validate my efforts. To top this off, in the weeks prior to the competition I was getting some serious pain in one of the pulleys in my left hand. I’d been able to keep climbing, but any hopes of making gains in the last cycle of training were dashed, so I just did my best to maintain the fruits of the months of work I knew I’d put in.

I’d assumed that my fitness and power would be totally screwed because of my injury, and so I really struggled to get my head in the game as I made my final preparations. When the event came around, I was super nervous for the first qualifier. Everyone was telling me how easy our first route looked, but honestly, I thought it looked pretty intimidating from the ground… Lots of big moves on holds that I wasn’t totally familiar with. I warmed up as best as I could, trying to be prepared for anything without burning out before further rounds of the competition. As it turned out, I felt really comfortable and confident on the wall. Perhaps better than any nationals before? My outlook on this comp began to change, and after getting my nerves out of the way on the first route, I was having fun just being a part of everything.

The second route was something of a step up. There was maybe a difference of about 5 or so grades between the first and second qualifiers, but I just acknowledged my form in the comp thus far, and trusted myself. A number of exceptionally strong climbers had fallen a fair way shy of the top on a tricky looking traverse sequence, but I only took in as much information as I needed to complete each move, and threw away any thoughts as to how hard the route might be. I felt really good on the wall once again, and felt fairly fresh all the way to the second last hold, at which I made a bit of a clipping error that saw me fumble my way off the wall. I knew I’d had enough in me to top the route, but I was pretty happy with my efforts nevertheless. 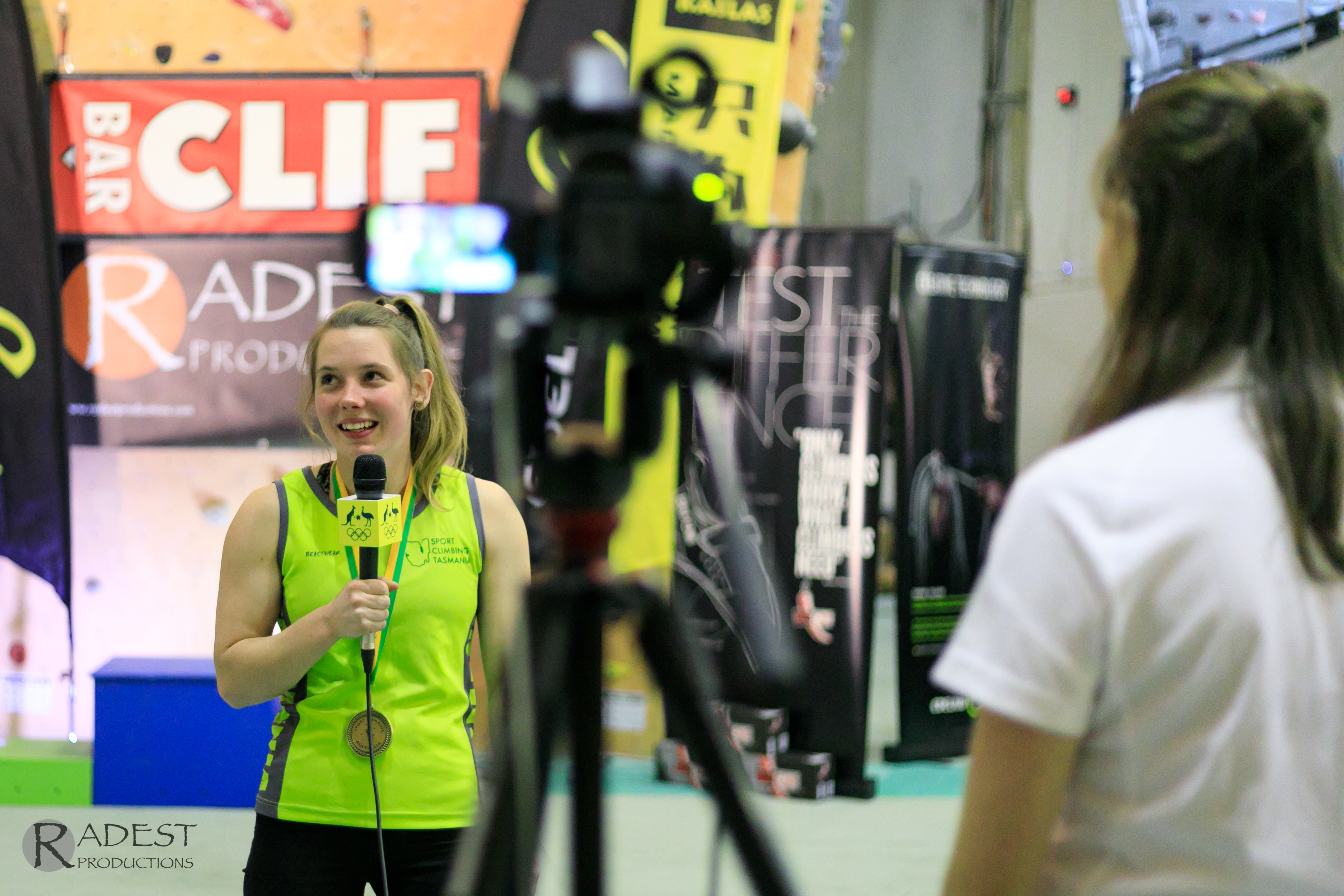 I ended up qualifying as the top Australian, but just half a move away from the overall first place. The finger injury I had feared would ruin me hadn’t held me back nearly as much as I had expected. I

knew how hard I’d worked and how focused I’d been, and so far it was showing in my performance. I felt nothing but confident in my ability to do my best in the final. This didn’t mean I thought that I had the victory in the bag, but I knew that it was a strong possibility. I just had to keep myself composed and give it everything.

We had a good break between rounds, and it was really nice to be able to reset before one final push in the evening. It wasn’t long before we were viewing our routes. I was really looking forward to climbing the Men’s final, even if I did think that it perhaps suited some of the other climbers more so than myself. I’m usually pretty sound when it comes to reading comp routes, but this one left me stumped. The roof came through some powerful looking moves through a series of small holds on volumes, into what was clearly some kind of foot first sequence. I just couldn’t for the life of me figure out which hand I wanted to lead with when moving through this section, and even after talking to the other climbers, I couldn’t quite sort it out.

Isolation felt like it flew by, which can be off-putting, because it means that climbers aren’t spending very long on the wall. Naturally the turnover of climbers slowed as we progressed through the ranks, far more so in the women than in the men, but not by much. I was left wondering what on Earth was spitting the men off so quickly! Inevitably, my turn came around, and I was still unsure about the sequence, but I knew the headspace I
wanted to be in when I was climbing, and something just clicked. I still wasn’t so sure about the sequence, but you can’t worry about these things anymore once you get on the wall. It would either work, or it wouldn’t. 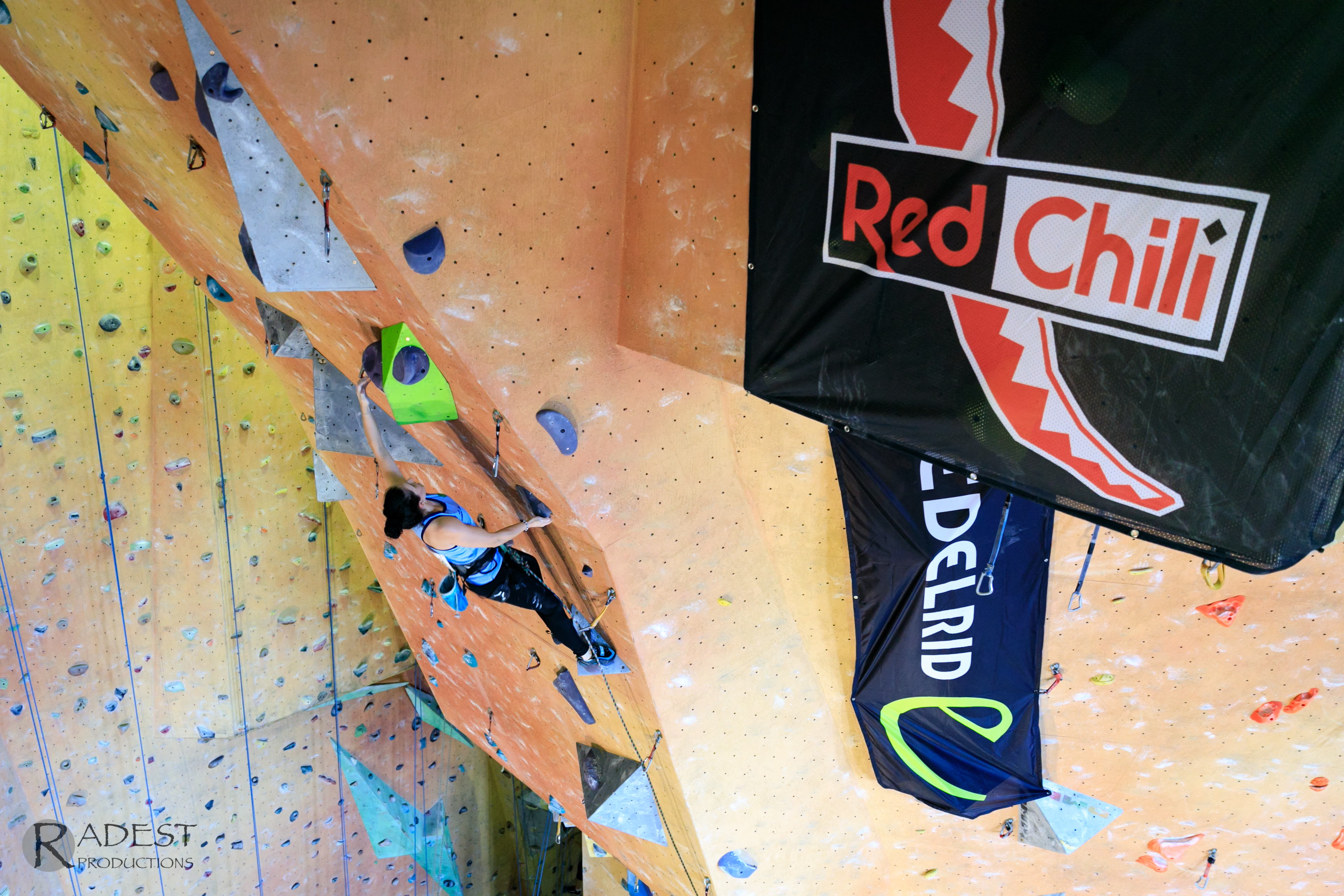 The route was fairly slopey to start, which isn’t all that much my style of climbing, so I didn’t feel 100% comfortable, but I moved as well as I knew how, and pulled through to the transition into the roof without a hitch. All of a sudden, on the last hold before the roof, the route turned on. I tried really hard to manage my body tension and not make any sloppy movements. With a series of deep breaths I managed to maintain my composure going into the roof, through the crimpy volumes, and into a nice jug before the spin-around. I thought of nothing but where each part of my body was positioned, and how to successfully make the next move. The physical difficulty of the route had lessened, but I was trying even harder to make sure I didn’t do anything stupid. I found one more rest, but I was pretty pumped and fell making one final throw to the last hold. 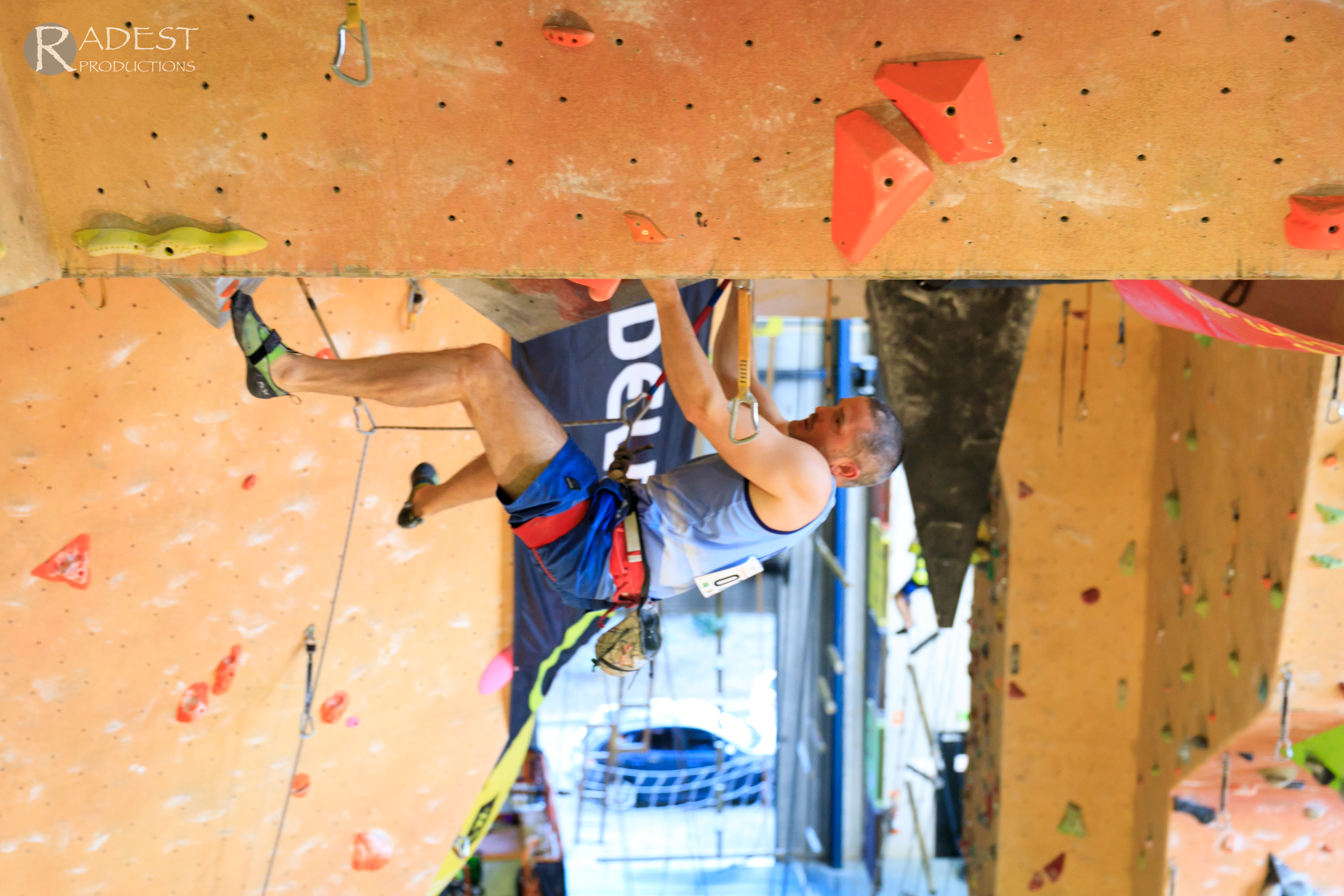 I had no idea how any of the other climbers had performed, but I was quickly reassured that I’d done enough to take the Australian title! I was stoked! But I had one more climber to go before I knew if I’d win the competition in it’s entirety. We had one international guest climber from Iran, Khosro Hashemzadeh, and he’d been looking super strong all weekend. He made his way confidently and quickly up the route, but rushed the transition into the roof, and fell… I was really, really happy with what I’d accomplished. I set the highpoint at 40+, with Khosro and Tom Farrell taking second and third respectively, both with scores of 26+. It made all the hard work and mental struggle feel worth it. I couldn’t be happier to be the Australian National Lead Champion for the second time!

Congratulations also goes to my really good friend Roxy Perry, who took the female title for the first time! She was followed by Lucy Stirling, and Emma Horan. And of course a solid kudos to everyone else who competed. This was a really great national event, with an amazingly stacked field!

Next up for me is the World Games in Poland for Lead and Boulder, followed by the Lead World Cups in Arco, Italy, and Briancon, France, and the Bouldering World Cup in Munich, Germany. I’m feeling in pretty good shape this year, and I can’t wait to see what the season will hold!